You can read a little more about the characters from the Downey series here!

Tommy played hockey for the Omaha AAA Lancers U18 team. After high school, he took courses in Criminal Justice from Metro Community College before entering the Omaha Police Academy. He achieved the rank of Detective shortly before joining the joint task force human trafficking case and is currently one of the youngest Detectives to serve on the OPD. He spent almost six years of his early childhood in the Witness Protection Program, and often jokes (to the select handful of people he actually trusts) he felt more free to be his real self in his fake life than he does living his real life. He used to spend hours imagining scenarios in which he would meet his real family…until one day, he did.

James has two sisters, both older than him and both work for the FBI. Stephanie, the oldest, is married, has two children, and is a Field Agent in the Chicago Division. Christie is a single workaholic and works at Quantico as a profiler. James’s father (Christopher) is a retired FBI agent who worked in Counter-Terrorism and James’s mother (Leila), a Moroccan by birth, is a proud stay at home mom. James prides himself on being the only member of the Hoffman family to choose the DEA over the FBI. He’s very liberal in his views and lifestyle compared to his very conservative parents. He has three obsessions; baseball, fast cars, and Kiki Downey.

Kiki only had one steady boyfriend (Tony Luchese) before James, and that was at the age of 16, shortly before moving to Chicago from Brooklyn. Tony was 19 at the time and got arrested for fencing stolen property on the night he was supposed to take her to the school dance. After that, Kiki promised herself she’d never date another ‘neighborhood’ guy again and has only had brief ‘hookups’ with guys ever since. Kiki’s mother, Theresa Anastasio, named her after her own mother Katarina Bonanno. Kiki’s father, Mickey Downey, deliberately refused to call her anything but Kiki for the sheer pleasure it gave him to annoy his wife’s family.

Mary was born and raised in Massachusetts in a small blue-collar town near Boston. She is the youngest of seven children and has always had a contentious relationship with her parents due to her lofty dreams of becoming a famous singer. Her mother Elizabeth Gates was a stay at home mom who ran a daycare from her home. Her father, Thomas Gates, was a factory worker and a devout Catholic insisting that at least one of his seven children join the church. When it looked like this might fall on Mary’s shoulders she left home to stay with an older cousin (for which her mother and her father disowned her) and moved to Brooklyn on her 19th birthday to ‘make it big’. She met Mickey Downey only four months later and had her only son Tommy shortly after turning 20. She only recently repaired her relationship with her birth family and visits them once a year, though she was never able to make peace with her parents who died while she was in the Witness Protection Program.

Mickey is the son of Pauli and Maeve (O’Malley) Downey. His mother is from Ireland and his father was a Brooklyn born half Irish, half Italian, bookmaker and hired gun for Two Fingers Luciano (part of Giovanni “Big Joe” Anastasio’s crew). Mickey’s Sicilian born Nonna Rosa never did quite forgive her son for marrying another Irish girl instead of a nice Italian girl from one of the ‘families’. When Mickey chose to work for Big Joe after his father died and eventually court his daughter Theresa, his Nonna Rosa declared it her final victory over Mickey’s mother Maeve. The story goes, in the old neighborhood, that Maeve was said to utter a curse on Rosa before moving back to Ireland in protest because the next day Rosa died in the confessional before getting to see her grandson marry into one of the wealthiest and most powerful Italian families in New York. Mickey’s superior illicit skills at making money for his boss, as well as his ability to neutralize his enemies without even lifting a finger, earned him the spot of Big Joe Anastasio’s right hand man by the time he was 30.

Ginny is the only child of David Sommers and Cynthia Peabody-Sommers. David builds custom handcrafted boats for a select clientele and Cynthia recently retired as Professor Emeritus at Georgetown University in Women’s Studies. Ginny’s parents were both in their 40’s before they decided to have a child. When growing up Ginny spent a majority of her time around adults at her mother’s office, where, out of sheer boredom, she began her favorite hobby of keeping scads of journals detailing her observations while people watching. Even though Ginny loves studying and observing people, having dual majored in Anthropology and Criminal Justice, she has always been socially awkward and shy in group situations. When she is alone with close friends she is actually quite daring and gregarious … except around Tommy Gates.

Joe is currently in the ROTC program at a prestigious military academy in Virginia. He has wanted to have a career in the Air Force ever since his father Mickey Downey took him to the National Air and Space Museum at the age of 7. He’s quite proud of both sides of his family but has no intention of following in any of their footsteps. Because his father divorced Joe’s mother, Theresa Anastasio, before he had even turned one, Joe has always had a more distant relationship with his mother than Kiki but is quite close with his Bonanno and Anastasio cousins. Unlike Kiki, Joe has a very outgoing and commanding personality. However, like Kiki, he idolizes his father. It took Joe longer to accept Tommy into their lives than it did Kiki but now they are very close.

Theresa is the only child of Giovanni ‘Big Joe’ Anastasio and Katarina Bonanno. Her mother, deprived of a son because of an emergency hysterectomy, doted upon her nephew Frank and treated him as if he were her own. Theresa and Frank Bonanno grew up more like siblings than cousins and are still extremely close. Theresa knew of Mickey Downey her entire life, as they grew up with many of the same cohorts, but they did not become friends until after high school.  When Theresa realized her father was grooming Mickey for his successor rather than her cousin Frank she began making overtures towards Mickey, hoping to curry further favor with her father and reduce tension between Frank and her friend Mickey. They had an on again off again relationship until her father put his foot down and insisted Mickey marry Theresa. Although Theresa had planned to accept an internship at a prestigious fashion company in Paris, she found it the expedient thing to do to comply with her father’s wishes. After Mickey divorced Theresa less than a year after her father’s death and took the children from her, Theresa attempted to make things work in New York, but found the sympathetic looks she would receive too suffocating to take and moved to Paris a few years later.

Jack Underwood grew up in New York and attended NYU where he met his wife Claire Anderson who was there on scholarship. When Jack asked Claire to marry him after he made Special Agent they settled in Brooklyn where Claire met and befriended a young Mary Gates. At the time Jack was an up and coming and very ambitious agent in Organized Crime. He had just been given the case of Mickey Downey and his boss Giovanni “Big Joe” Anastasio when his wife mentioned her new friend was dating Downey. Jack pressed hard for Mary to help the Bureau even though he felt bad about using his wife’s young friend, because he felt she would be able to do what no one had done before and flip Downey. After the trial ended in a mistrial Jack felt it was his responsibility to look after Mary and her young son Tommy because he felt guilty for putting them at risk in the first place. Jack and Claire have always though of Mary like a little sister, and never having been blessed with children due to the chemotherapy Claire had to undergo, they doted on Tommy as their honorary nephew. When Downey retired to Chicago, Jack put in for a transfer to the Chicago branch so he could keep an eye on ‘the one that got away’.

Maeve O’Malley is the daughter of Seamus O’Malley and Aislyn McLaughlin. She was raised on an Island off the west coast of Ireland called Achill Island. When she was a teen she was sent to live with her aunt’s family in Galway to care for an elderly relative. Maeve was only eighteen when she met Pauli Downey in Boston. The summer before she was due to go to University in Galway her aunt arranged for her to have a tour of America (one of Maeve’s fondest dreams). The first stop on Maeve’s tour was to deliver a package to her McLaughlin relatives in Charlestown then spend a week with her O’Malley cousins. It was in Boston where she met Pauli Downey (there on business for Giovanni Anastasio). The two fell madly in love and instead of attending University as planned, Maeve moved to Brooklyn with Pauli. Pauli’s mother Rosa Bruno Downey hated Maeve from the get-go because she had hoped her son would marry an Italian girl. The Downey side celebrated the match because it only strengthened their ties to “a certain kind of business”. After Pauli’s death, Maeve couldn’t wait to return to her family in Ireland and only waited until her daughters were off to college (thanks to Mickey) to do so. Self-described as “not the maternal type”, she none-the-less is very protective of her children. At a sprightly 78, she is considered the Matriarch of the “business end” of Downey, O’Malley and McLaughlin clans. She lives on Achill Island and cares for her elderly father. 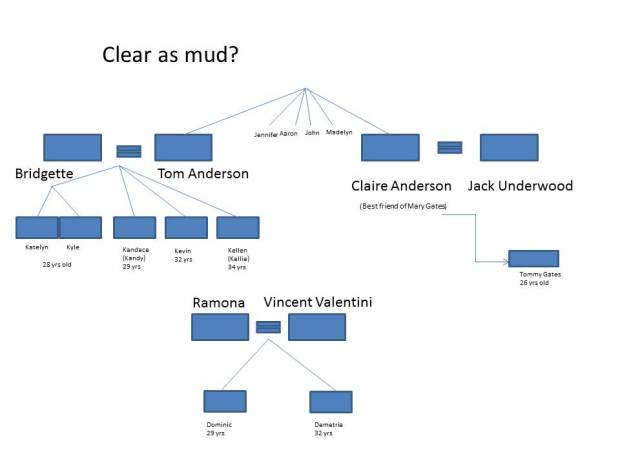 ~~(I will be adding the Anderson-Valentini clans from my short stories soon!)~~

You can read the free supplemental Flash-fictions here.

Talk to me! I'd love to hear from you... Cancel reply